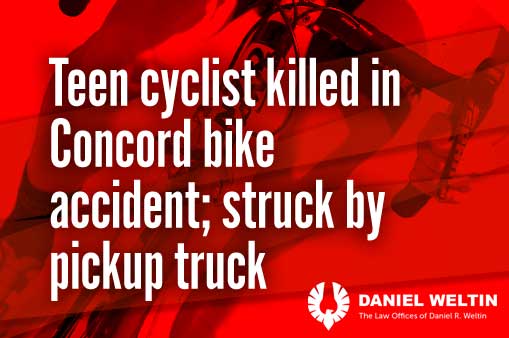 Concord, CA — A 16-year-old boy has died in a Concord bike accident.

According to the Mercury News, the cyclist was hit by a pickup truck around 6:51 p.m. on Willow Pass Road at the intersection of Fry Way.

The Concord boy died at the scene. His name has not been released.

The Fairfield pickup truck driver was westbound on Willow Pass Road when he struck the cyclist, who was in the west crosswalk at Fry Way. The driver stayed at the scene, police said. Alcohol or drugs are not believed to be a factor.

The bicyclist went northbound on Willow Pass Road and was in the west crosswalk at Fry Way when he was hit.

Police have not determined the cause of the Concord bike accident. Police are looking for witnesses, who are asked to call Officer Matt Forristall at 925-671-3172.