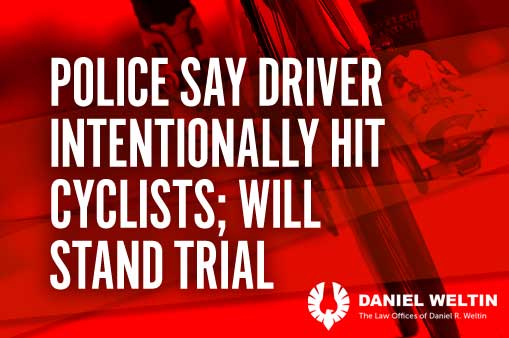 San Rafael, CA — The driver of a Dodge Ram that police allege intentionally hit several Bay Area cyclists in October has been ordered to stand trial.

21-year-old Aaron Michael Paff of Novato is charged with four felony hit-and-run charges. He faces up to five years if convicted.

Marin County Superior Court Judge James Chou ruled Thursday that there is sufficient evidence to justify a trial, according to the Mercury News.

Paff is accused of intentionally swerving his Dodge Ram pickup truck into four cyclists on Oct. 7. The riders were participating in the Jensie Gran Fondo of Marin, a benefit for the Marin County Bicycle Coalition.

48-year-old Spencer Fast of Mill Valley suffered major injuries in the collision, and was airlifted to Santa Rosa Memorial Hospital.

Three cyclists with less severe injuries were taken by ambulance to Marin General Hospital. They were Robert Grier, 53, of Danville; Oliver Colvin, 55, of Larkspur; and Joseph Olla, 49, of Danville.

Defendant denies that he intentionally hit the riders.

Paff has pleaded not guilty.

A motorcyclist who recorded the crash on a helmet camera provided the footage to police. The CHP received several tips that led them to Paff, and he was arrested that night. Paff denies that he intentionally hit the riders.

The accused assailant, who has another misdemeanor hit-and-run case springing from a property damage incident in May, remains free on $200,000 bail. Police responding to the May incident found an open container of alcohol in his truck.