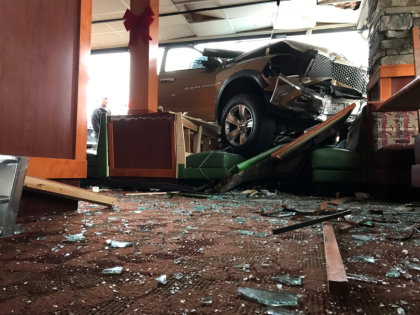 Officials said no employees at the Hayward, California restaurant were injured in the accident.

Five people were injured at a Sizzler restaurant in Hayward, including a young girl who was trapped under a table, when a pick-up truck slammed through the window Sunday afternoon.

According to the Hayward Police Department, officers were called around 1:15 p.m. to the restaurant at 24107 Hesperian Blvd., (just south of the Hayward Executive Airport) and stated “the brown Ram 1500 pickup truck was heading south on Hesperian when it collided with a Jeep which was turning right onto the boulevard from West Winton Avenue. The crash caused the driver of the pick-up to lose control of his vehicle.” The department also said, “The vehicle ultimately came to rest after impacting the south/east corner of the Sizzler restaurant.”

The restaurant sustained plenty of damage, with the side of the building being torn open, windows were shattered and tables destroyed.
Of the 5 people that were injured, the young girl’s injuries were considered serious, two others had moderate injuries and the other two sustained minor injuries. They were taken to local hospitals for treatment, police said., adding that no restaurant employees were injured.
It is unclear what led up to the accident and the collision is under investigation.