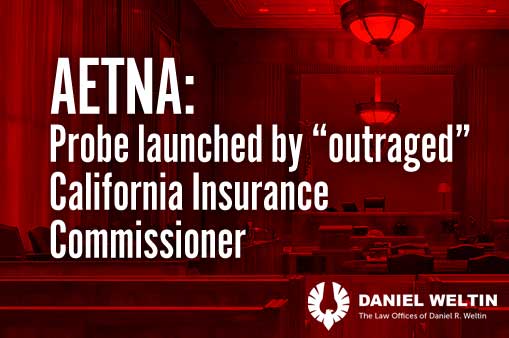 CNN is reporting that California’s insurance commissioner has launched an investigation into health insurance giant Aetna after the company’s former medical director testified under oath he never looked at patients’ records when deciding whether to approve or deny care.

“If the health insurer is making decisions to deny coverage without a physician actually ever reviewing medical records, that’s of significant concern to me as insurance commissioner in California — and potentially a violation of law,” said California Insurance Commissioner Dave Jones of the Aetna investigation.

Aetna has 23.1 million customers in the U.S.

The Aetna investigation comes on the heels of a deposition by Dr. Jay Ken Iinuma, who served as medical director for Aetna for Southern California from 2012 to 2015, according to the insurer.

The doctor said it was Aetna’s policy that nurses reviewed records and forwarded their recommendations to him.

Insurance commissioner Jones told CNN he assumed “that physicians would be reviewing treatment authorization requests,” and that it’s troubling that “during the entire course of time he was employed at Aetna, he never once looked at patients’ medical records himself.”

“It’s hard to imagine that in that entire course in time, there weren’t any cases in which a decision about the denial of coverage ought to have been made by someone trained as a physician, as opposed to some other licensed professional,” Jones told CNN.

Jones is asking Californians who think they may have been hurt by Aetna’s decisions to contact his office.

The deposition was part of a lawsuit filed against Aetna by a college student who suffers from a rare immune disorder. The case was expected to go to trial this week in California Superior Court.